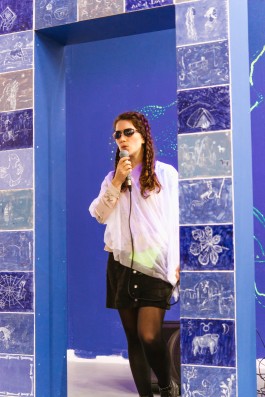 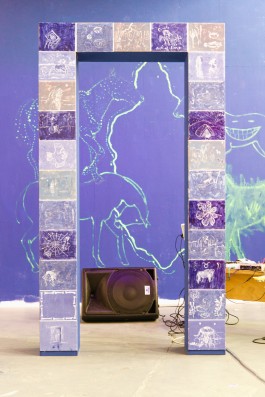 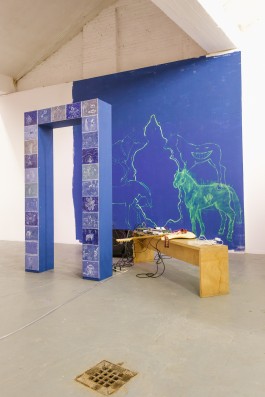 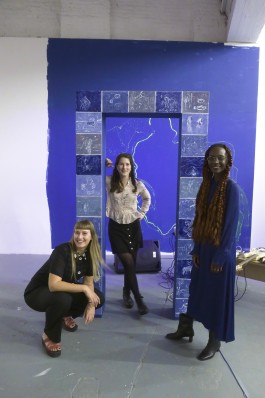 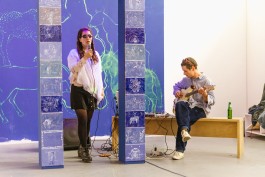 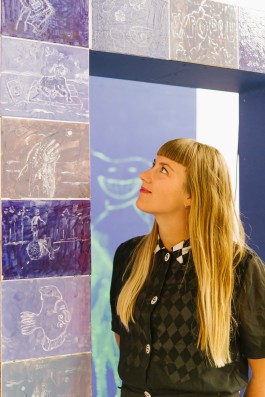 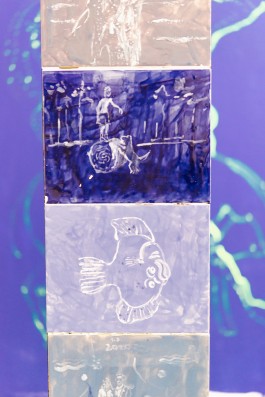 Since man has access to fire and one has the time and the opportunity to tell each other stories around the campfire, telling, sharing and collecting stories is an intrinsic part of culture. When religion took on a more prominent role, storytelling became even more important. It is a way of sharing spiritual experiences by telling - often mystical - stories.

With the advent of the Internet and contemporary resources such as YouTube, podcast or a modern encyclopedia such as Wikipedia where anyone can add or edit a page, story transfer becomes easier. It ensures that transfer does not only take place from generation to generation and we have new media available to reinvent stories: from traditional storytellers such as contemporary griots to podcasts of influencers. This makes storytelling easier to spread and share
Expoplu Experiment: Modern-day Griots and tapped train conversations is a duo exhibition with art by two different artists.

During a 10-day working period, Ayo and Kateřina Gabriel Konarovská transformed the exhibition space of Expoplu into a lively studio in which they each worked on their own story. An experiment in which meeting, collaboration and exchange of each other's materials, working process and fascinations are central.

For this edition of Expolu Experiment, Ayo's and Konarovská's shared interest in collecting stories - both autobiographical and fictional - is the starting point of this exciting collaboration. The artists have been given free rein to create new works of art within the walls of Expoplu

Ayo continuously works on a research project that questions the archive capacity of unofficial bodies in the preservation of cultural heritage: IKOCE. The name is taken from the dance performance Ikoce - which arose in response to socio-political changes in Northern Uganda in the 1940s. The most important was the heavy recruitment of Lango men in the King's African Rifles who had to fight for the British Empire during World War II. Decades later, until the 1990s, Ikoce was used as a social commentary, satire and entertainment. Ayo studied the performance based on found images of the last recorded performance in the nineties. Her process consists of unraveling this history and is not linear or fixed; with the result that the manifestations of her projects are expressed in various mediums such as sculpture, video, sound and performance. Her research project serves on the one hand as a report of the performance, but also as an invitation to more inspiration and vibrancy.

Kateřina Gabriel Konarovská has always been interested in the interaction between communication, connection and misunderstandings between people. For example, conversations between foreigners she eavesdroppers during a train journey can inspire a new lyrics. Or one of her dreams combined with factualities the starting point of a new painting. Her art manifests itself as a guerrilla mission armed with repetitive patterns of drawings she uses to print textiles. It is the natural elements such as her fascination for sea spark, or the beauty of existing shapes that she uses to cast dark themes into a more inviting form. She discreetly dissolves the norms and values of life. For example, Konorovská's art balances between her dreams that overlap with everyday or scary moments compared to social taboos. Paintings and tapestries are historical mediums that the artist uses as a carrier of her work, to balance in a contemporary way between traditions and the speed of technology.